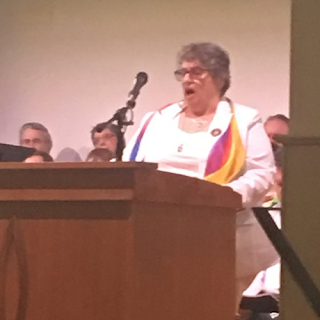 Linda Sager Kazalski, (sometimes called Bryghteyez) was born and raised in the Catskill Mountains of rural upstate New York. She’s been a tree-hugging dirt-worshipper, a political activist and general trouble-maker since her teens.

After being solitary practitioner for years, she has been involved in the Hampton Roads pagan community for over 25 years. She joined a local eclectic coven where she earned the rank of second-degree priestess. She withdrew from the coven in 2015 to organize Three Branch River Grove, ADF of Hampton Roads, Virginia. She has been a member of Ár nDraíocht Féin: A Druid Fellowship (ADF) since 2014 and was elected Senior Druid of Three Branch River Grove, ADF at Midsummer 2016. In May 2020 she was elected Regional Druid for the South East region.

She teaches workshops at local shops and festivals on topics such as Magical and Medicinal Herbalism, Introduction to ADF Druidry, and Introduction to and the Science of Energy Work. She is also a sometime contributor to Alternatives HR (formerly Hampton Roads Pagan Resource Directory) website, the ADF Southeastern Region Newsletter, Oak Leaves (the quarterly journal of ADF) and Tumblr.

She attended the State University of New York at Geneseo, where she earned degrees in English and History, played volleyball and billiards, was a member of Arethusa Sorority (Sigma Gamma Phi, Gamma chapter), and met her husband and bass guitarist extraordinaire, Michael Kazalski, formerly of Coyote Run. She has been a licensed real estate title insurance agent and paralegal for since 1981. She owns and operates Seven Cities Signings (a mobile notary business) with her husband. 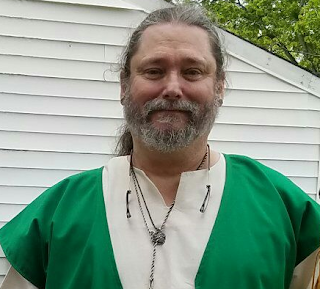 Wes has had a long and varied path, growing up in the Ozark mountains of Northern Arkansas. Like many who grew up in the rural South, his path began in a Christian church, in his case Southern Baptist. As a young man he suffered a crisis of faith that led to walking down many different paths, but when he found Ár nDraíocht Féin he found a place where his oddly shaped peg fit. He completed a twenty year career in the US Navy, raised five children, and too many dogs. He is currently ordained through the Universal Life Church, but he is working on completing the Dedicant Path, with the intention of seeking ordination as clergy in the ADF. He keeps a post-Viking Celtic hearth, and worships as a member of the Three Branch Rivers Grove in Hampton Roads, Virginia, where he serves as the Grove Preceptor and Purse Warden. He also serves as the Listmaster and Forum Moderator for ADF, and the Coordinator of the Military Outreach special interest group. 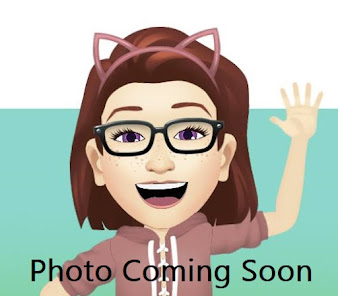